Fourth Street Yard in Owensville, Missouri is located to the south of the Rock Island Railroad interlocking tower. The OTRR and CRI&P interchange cars here, with the Rock's connecting track located to the north of the interlocking tower.  The north end of Fourth Street Yard was a choke point for the OTRR, and train delays were common. In 1964, the OTRR decided to build a new classification yard approximately three miles to the southeast of Fourth Street Yard. The yard tracks at the north end would remain due to several industries located there, but the south yard tracks would be removed. The reduced Fourth Street Yard would continue as an industrial yard for the industries served at this section of Owensville, Missouri, and also continue to serve as an interchange point with the Rock.

The north end of the old OTRR mainline now serves as the interchange track with the Rock.  The old main to Hermann was cut about three-quarters of a mile north of the interlocking tower.  The interlocking tower was closed in 1965, but still stands (just visible on the right side of the photo). Cars are left on the old mainline track, with the Rock accessing it to the north of the tower on the original interchange track.

I have updated the track plan to reflect the actual track work on the layout. (Updated 2/3/21) Owensville Agricultural Switching & In... 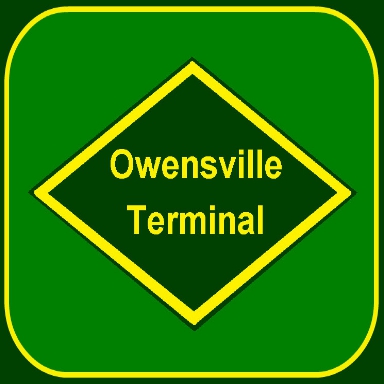